WHAT ARE THE 7 FUNCTIONAL MOVEMENT PATTERNS

The 7 Functional Movement Patterns are patterns which our bodies move naturally, every day. Think about picking up a box from the floor, pushing yourself up off the floor, running while playing a sport or with your children, carrying your child on your hip, tying your shoe laces, vacuuming, rearranging furniture…each one of these activities requires movement that falls under one of the 7 Functional Movement Patterns.

Rather than focusing on isolated muscle groups, these movement patterns focus on training the body as one unit, meaning we recruit multiple muscle groups to develop total body strength, power and stamina. They are:

WHY SHOULD WE TRAIN USING ALL 7  MOVMENT PATTERNS

We need functional strength in every plane of motion to help us prevent injury when moving in everyday life. When the movement patterns you practice in the gym mimic the movements you perform in everyday life, you become stronger, more efficient, and can literally slow down the clock on age-related muscle breakdown.

By strengthening these specific patterns in the gym, we have the ability to  move more efficiently in everyday life, reducing the risk of injury and increasing the quality of life, now and as we age.

WHAT ARE THE THREE PLANES OF MOTION

We live in a three-dimensional world. Our bodies need the ability to move in all three dimensions.The three planes of motion are the sagittal, frontal and transverse planes. Imagine each plane as a plate of glass that cuts the body into either front/back (sagittal), left/right (frontal), or top/bottom (transverse) halves. If a movement seems to mostly track along one plane over the others, it can be classified as being predominately in that plane of motion.

Every exercise performed in the gym can be related back to movements we all do in real life and most exercises are predominantly performed in one plane of motion. We all push, pull, flex, extend, squat, lunge, bend, and twist throughout the day. 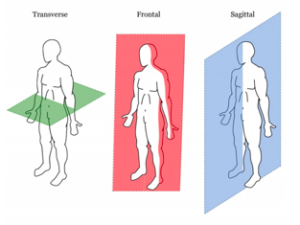 An easy way to explain this is to visualise dividing the body into left and right halves using an imaginary line gives us the sagittal plane.

Cuts the body into front and back halves therefore side-to-side movements happen in the frontal plane.

One way to visualize frontal plane movement is to imagine two plates of glass pressed up against the front and back sides of the body, creating a channel where the body can only move left or right, not forward and backward.

Cuts the body into top and bottom halves therefore rotational movements occur in the transverse plane.

Transverse plane exercises include spinal rotation exercises ,Limb rotational exercises ( Limb rotation is described in terms of whether it is rotating toward the center of the body or away from it) Shoulder and hip exercises (transverse movement specifically occurs at the shoulder and the hip – when an arm or leg is held at 90 degrees to the body and moves toward or away from the center, it becomes transverse plane movement.eg single leg hip rotation and shoulder rotations

Poor range of motion and instability in just a single joint can cause over compensation resulting in developing alternative movement patterns which in turn can lead to chronic pain and injury.

By improving three-dimensional movement , you reduce your risk of injury and are more likely to improve your sports and your fitness performance

Your ability to move effectively in everyday life will also become easier. Loading shopping, playing with the kids even doing house work and gardening will become effortless and more enjoyable.

Every exercise performed in the gym can be related back to movements we all do in real life and most exercises are predominantly performed in one plane of motion. We all push, pull, flex, extend, squat, lunge, bend, and twist throughout the day.

So in summary it’s important to incorporate the 7  fundamental movement patterns and the 3 ranges of motions into your workout routine to improve every day functional movement and prevent injuries.

Previous Next
Close
Test Caption
Test Description goes like this